James Pearce grew up in the UK near London and moved to Australia with his family in 2003. He played a number of sports including soccer, basketball, rugby union and cricket and spends a lot of time watching sport, particularly when his favourite teams (e.g. Watford, Cleveland Cavaliers) are playing. James first got interested in physiotherapy when he was 16-years old, when he himself had to seek treatment for patella tendinopathy. The combination of hands-on practice, a constantly varied workload and potential for involvement in sport made this an ideal profession for him to pursue. 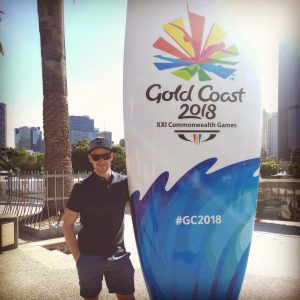 James started his journey by completing a Bachelor of Medical Science degree in 2010 at ANU and then went on to complete his physiotherapy degree at the University of Melbourne in 2013. Since graduating, James has been actively involved in sports, predominantly rugby union, and has been fortunate to travel both nationally and internationally as a physiotherapist. His experience working in team sports motivated him to complete a Masters of Physiotherapy in Sports through the University of Queensland which he recently completed in October 2017. James hopes to continue to develop his passion in sport over the coming years at Sportstec. During his spare time, James enjoys spending time with family, hiking, playing board games such as Ticket to Ride, and training and coaching at a local CrossFit gym in Braddon.